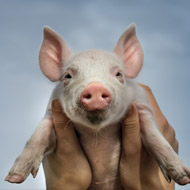 Researchers use gene-editing technology to produce virus-free pigs
Scientists are a step closer to making animal organs suitable for human transplant after producing the first piglets free of endogenous viruses.
Using gene-editing technology, researchers deactivated all porcine endogenous retroviruses (PERVs) in cloneable porcine fibroblasts and successfully produced PERV-free piglets.
The study was led by eGenesis, a US biotechnology company focused on transforming ‘xenotransplantation’ into a lifesaving medical procedure.
Xenotransplantation, the use of animals for human transplant, is a promising approach to ease the severe shortage of organs for human transplantation, eGenesis explains. Up to now, however, the risk of cross-species of transmission of PERVs, among other issues, has impeded its use in humans.
“This research represents an important advance in addressing safety concerns about cross-species viral transmission,” says Luhan Yang, co-founder and chief scientific officer at eGenesis. “Our team will further engineer the PERV-free pig strain to deliver safe and effective xenotransplantation.”
The study, published in Science, examined the risk of PERV infectivity and demonstrated in vitro that PERVs infected human cells.
Researchers found that PERVs transmitted to human cells that had no history of contact with porcine cells in the co-culture condition, demonstrating the need to address this issue to ensure safe xenotransplantation.
The team developed a strategy to allow for efficient and precise genome editing in primary cells using CRISPR-Cas9 technology. Together with a method to inhibit primary cell death during genome editing, they successfully produced viable PERV-free porcine embryos using engineered primary cells.
The researchers implanted these embryos into surrogate sows and demonstrated the absence of PERV re-infection, initially in foetuses and finally in recently born piglets. The piglets are the first animals born free of endogenous virus and will be monitored by eGenesis for any long-term effects and impact.